Our first day at BJU, I saw a small sign pointing the way to the BJU Museum. I hadn’t read anything about it in the tournament information, so I just assumed it was your typical “we have a couple of nice paintings to show off” museum like a lot of places have.

As I entered, it took a few seconds for my eyes to adjust to the low lighting.  Huge, wall-sized tapestries were the first thing my eyes focused on.  An enormous tondo (round painting) hung in the lobby.  ‘Probably a copy’ I thought, as I walked over to the placard. Nope, original, 15th century.  Wow.  Maybe this place won’t be so bad after all.

How I wish I could’ve taken just a few photos to share with you! I’ll just have to tell you about it.   BJU has amassed the largest collection of sacred art in the Western Hemisphere.  There are 27 galleries  filled with the most breath-taking art I have ever seen.  The museum itself houses originals from the Italian Gothic, Italian Renaissance and Mannerism, Italian, French, and Spanish Baroque, Spanish Renaissance, 19th Century English, French, and German, Dutch and Flemish Baroque and Northern Renaissance.  I was dumb-founded.   In the entirety of the museum, I saw only one copy, and an excellent copy it was -that of Raphael’s Madonna of the Chair.  Everything else is the real thing folks!

In one of the galleries called The Great Picture Gallery, they have installed the art in a traditional salon-style fashion, floor to ceiling. It’s overwhelming–your eyes can’t take it all in.  Everywhere you look original Baroque masterpieces, worth untold thousands of dollars, hang in all their splendor.  Even more awe inspiring is the fact that each and every painting is sacred in nature-paintings of the Holy Family, stories from the Bible, Church Fathers, Apostles, Saints, Allegories, Histories, etc.  In many galleries, they have gone to great lengths to install various pieces of architecture/framing around these works so that you get a more accurate picture of what it would have looked like in it’s original location.  Only the Vatican has more sacred art than this museum!! Unbelievable!

I don’t remember what gallery I was in when I first started to hyperventilate 🙂  It may have been when I rounded a corner and saw a very rare painting, Allegory of Wisdom,  by Marietta Tintoretta.  Have you heard of Tintoretto?  Marietta was his beloved daughter who, in order to learn her father’s trade, dressed up in boy’s clothing for the majority of her childhood, disguised as an apprentice.  I could not find one single image of this painting on the internet.   They have her father’s Visit of the Queen of Sheba to Solomon in the gallery next door.

I know I began gasping for air when I entered gallery 3 and saw Botticelli’s Madonna and Child with an Angel.  This was the first sacred painting by Botticelli I had ever seen– painted after he had been converted under the preaching of the fiery evangelist, Savonarola.  He had experienced spiritual renewal under Savonarola’s teaching, repented and never painted the profane again.  Fortunately, I found this image which is now in the public domain, though it doesn’t do it justice at all. 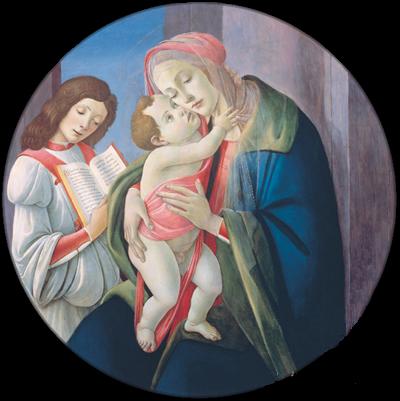 I can now say from personal experience that the ‘red’ in Granacci’s Rest on the Flight into Egypt, and countless other 15th century works,  is like no color I’ve ever seen before.  It glows.

As a Christian, the flood of emotion from looking upon these myriad images was unavoidable and it finally caught up with me in gallery 20–I gazed upon Rubens’ Christ on the Cross and fought back tears.

Then I went to the museum store and felt much better 🙂 Here’s my stash–three of the books about the museum were only $1.

The trip to South Carolina was worth it for this experience alone.

As if that wasn’t enough to last my art-loving soul for the next few years, I found out the next day that the War Memorial Chapel had it’s own little surprises.  What were they? Oh, just the largest collection of Benjamin West paintings in one location!  Seven of his originals, commissioned under George III, hung in the chapel. I was blown away again!  These paintings are enormous, floor to ceiling, on average about 148X115 inches!!  Photography wasn’t allowed so I’ll quote from the book,”these pictures probably form the most outstanding series of religious paintings in XVIII century England.”  As I gazed upon West’s The Brazen Serpent,I made up my mind that I must have more Biblical art in my home.  But  I’ll save my thoughts on that for another post! 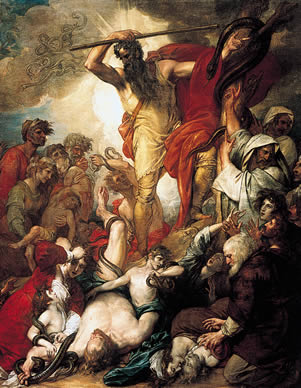